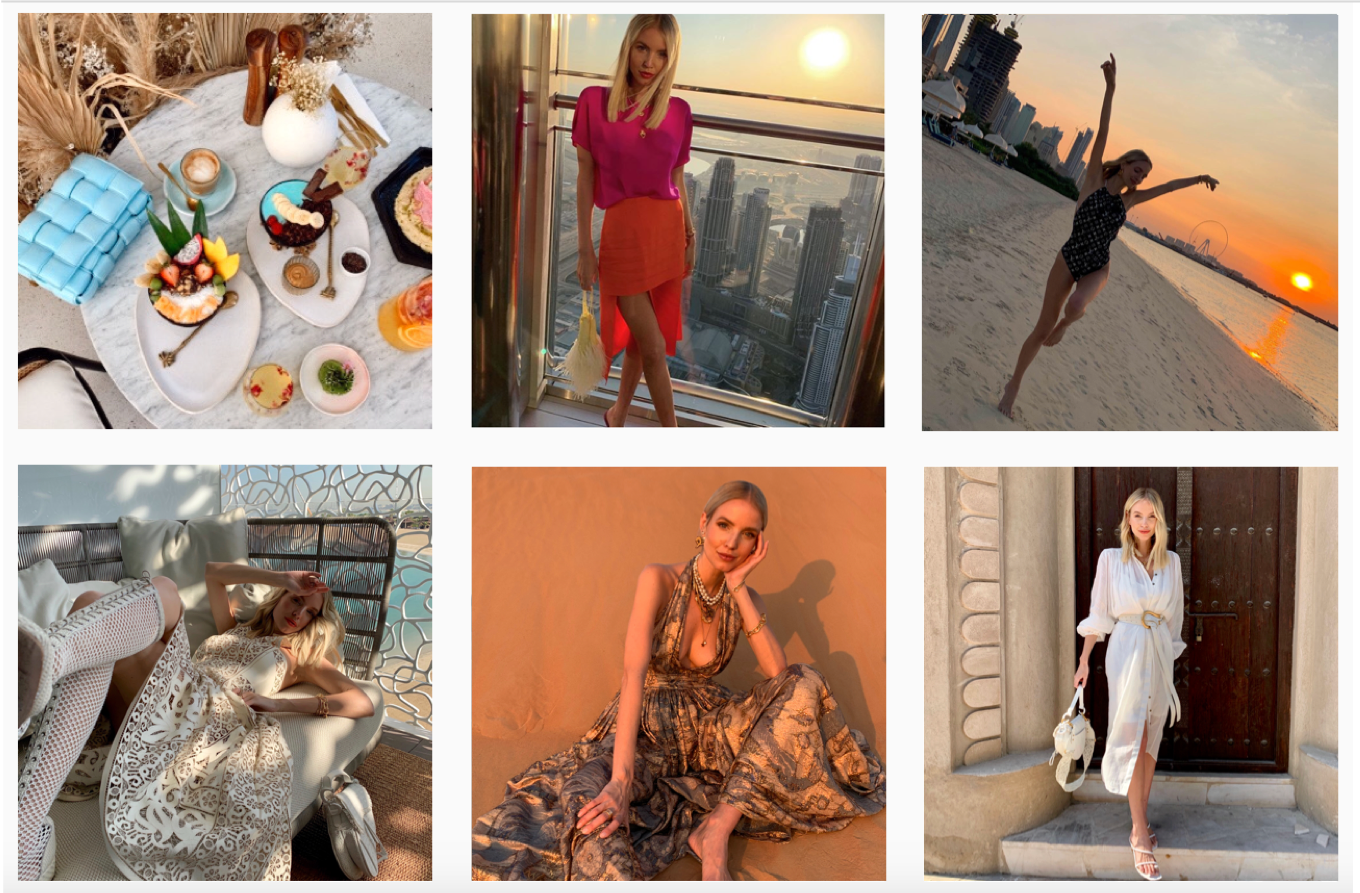 Despite the fact that I am fairly well travelled and that I have had several stopovers in Dubai on my way to Asia, up until December 2017 I had never actually left the airport in Dubai before! So when Dubai Tourism spontaneously invited me to be part of an international project with bloggers from all over the world, of course, I didn’t hesitate to say yes. The project was all about discovering this spectacular city and capturing the highlights on camera – does that sound like the perfect job or what?!

I. WHERE TO STAY

The Raffles – The Palm
This time we stayed at Raffles The Palm for the first time Ad we were in desperate need of some sun and morning dips in the sea! I loved our room with Dubai views and beautiful interior! We went to the beach almost every morning and moon and would stay until Sunset. I loved walking along the beaches at The Palm to keep my body moving and soaking up the sun and fun Dubai views. We tried two restaurants at The Raffles – Matagi (Japanese) and Piatti by The Beach (Italian) which were both outstanding! See more in my Dubai food guide (here).

One & Only Royal Mirage

The first time I stayed at the One & Only Royal Mirage, it completely took my breath away, especially the amazing Arabian Courtyard. The hotel is huge and has amazing facilities including 8 restaurants and 3 pools, but I spent most of my relaxation time at their private beach area because their beach umbrellas are so cute and the skyline view from the ocean is incredible!

If there’s one thing Dubai knows how to do, it’s luxury – and the Bvlgari Resort is no different. They even have their own Yacht Club overlooking the harbour, which brings an almost Mediterranean vibe to Dubai! The design of the Bvlgari is completely different to the One & Only Royal Mirage as it’s much more modern, but I honestly love both hotels and appreciate their differences!

II. WHAT TO SEE AND DO

Dubai is a city of skyscrapers – or should I say THE city of skyscrapers?! The best-known example is the Burj Khalifa. At 828m it’s the highest building in the world by far! We were lucky to be taken all the way up to the 148th floor by Dubai Tourism (Surprise: also the highest outdoor viewing platform in the world ;)). From there you have an amazing view over the city that makes all the other skyscrapers look as if they are far from scraping anything at all. One advantage of being on top of the world is that the view is paired with canapés in Dubai! ;). We also went to the 124th and the 125th floor, which are much more crowded but worth the money if you ever visit this amazing city!!

Jumeirah Beach is the stretch of white sand tickled by waves that runs along Dubai’s skyline. Many luxury resorts are placed here such as the Burj Al Arab, which I’ll talk a little more about later on. Despite all the luxury hotels, Jumeirah Beach also has a section that is open to the public, so everyone can hang out and jump into the waves. When you’re standing on the beach you are basically surrounded by the skyline (and palm trees and the sea)! We came here before sunset to watch the sun going down, reflected in both the waves and the glass towers – it was simply magical!

You definitely shouldn’t leave Dubai before you have been to the desert. While the glass-filled city is all about modernity and entertainment, the desert is vast, it’s all about silence and getting lost. Here, you can also get more of a sense of Arabian culture. Desert safaris are relatively inexpensive and usually include the jeep ride, as well as a local meal with entertainment at one of the big camps. I am fascinated by desert landscapes and it’s a dream of mine to repeat this experience one day. Maybe I’ll even spend a night in one of the incredible desert camps. Hopefully, that dream will come true sooner rather than later (I might already have a loose plan ;))!

We also stayed in a hotel right above the Dubai Mall which meant that some of the best attractions – like the Burj Khalifa and the water fountains – were only a couple of steps away. But the mall is actually an attraction itself, featuring over thirty cafés (you know how crazy Alex and I are about coffee) but also an aquarium! We got our ticket at night so that we were able to visit the aquarium super early the next morning before most of the tourists arrived. It was a surreal feeling to be basically all alone in there (aside from the fish, including more than 300 sharks and rays ;)).

When I started doing research for Dubai, I came across the Miracle Garden and knew I had to go there! It’s in my genes to love flowers because my mother is so crazy about her garden, she’s never happier than when she has soil under her fingernails!! I was so happy that the Miracle Garden didn’t disappoint in real life, the flowerbeds are so beautifully designed and decorated that I simply can’t compare it to any other park! Like with the aquarium, we came here early in the morning to avoid the crowds and it was definitely worth the shock of the alarm clock going off! 🙂

In November I went on the first helicopter flight in my life, and I love-love-loved it! Which is why I was head over heels when I heard that I would go on my second one not even three weeks later! This time the helicopter had doors, which made Alex feel much more comfortable, and there also was a safety briefing (in Panama people were much more laid back about that). We also all had to stand on a scale to make sure we weren’t too heavy for the plane and to distribute our weight perfectly on the available seats. Luckily the scale decided that Alex and I were supposed to sit in the front (I felt as if the Sorting Hat had called “Gryffindor”) and we had the best view! We started at the Palm, which was even more impressive from above, and circled the entire skyline! It was amazing!!! I would have stayed up there forever if they had let me (unfortunately it was against the safety regulations ;))!

Our schedule was very packed and we barely had time to get back to earth (literally and metaphorically speaking) before we headed to an event. We travelled by boat, which was such a unique and fun way to see the city. I would definitely recommend it! Especially as the sea breeze feels so nice in contrast to the Dubai heat.

III. WHERE TO EAT

One of my all-time favourite restaurants! I completely fell in love with this restaurant during my last trip to Barcelona and was excited to see that they just opened a restaurant in Dubai, too! You have to have breakfast here at least once during your stay! Their bowls not only taste amazing, they are sooo picturesque and colourful. Just as a warning: it’s super huge serving sizes so when Alex and I ordered to bowls and a savory dish, we had a hard time finishing it (but took rest for take-away!). If the dish is not vegan, ask they for a vegan alternative and they are very nice and will make it work!

The best breakfast I had in Dubai and a true hidden gem! The cute place reminded me of Bali as their café is inside a surf shop! The restaurant was packed with expects and surfers and had such an amazing and fun atmosphere. The food and overall vibe made me so happy that I almost wanted to keep it all a secret (this is actually the first time I’m sharing the name ;)), but of course, I had to share it with you guys in the end ;).

Another great brunch spot, because you can never have too many! The interiors here are so fun and the huge neon sign ‘don’t kill my vibe’ tells you all you need to know about the atmosphere. They had so many acai variations but I still prefer the both breakfast spots above!

If you’re craving for a yumm and easy vegan snack: my favorite superfood chain from Paris also has some restaurants in Dubai so you can always get their delicious acai with crunchy Granola, banana cake or one of their amazing colourful lattes!

One of my absolute favorite spots for food in Dubai is Comptoir 102. This café is also a beautiful little shop and you can hide from the the business of a big city in this little oasis. I came multiple times and loved the vibe and food!

WHERE TO EAT – DINNER

A view I had fallen in love with while researching was the one from the beach looking at the sea, the blue sky, and the white sail-like Burj Al Arab. Alex and I went to get something to eat at the Shimmers – a restaurant situated right on the beach with that exact view! Unfortunately, it was very stormy when we went, and the food (plus me!) were nearly blown away!

The first time I properly visited Dubai, we went for dinner at the Burj Al Arab one night which was a super exciting experience. Before I started working on the blog I had never eaten (let alone stayed) at a four-star hotel before! So you can only imagine how curious I was to find out what the restaurant of a 7 star hotel would be like.

On my first amazing trip to Dubai our schedule was so packed that when I looked over the pictures again, I couldn’t believe everything that we had done!! There is definitely no other place in the world quite like Dubai and even though I have now been back a few times, I still can’t wait to go again! xx Leonie

Old but gold, below you can find some old Dubai pictures I took over the years! 🙂 <3