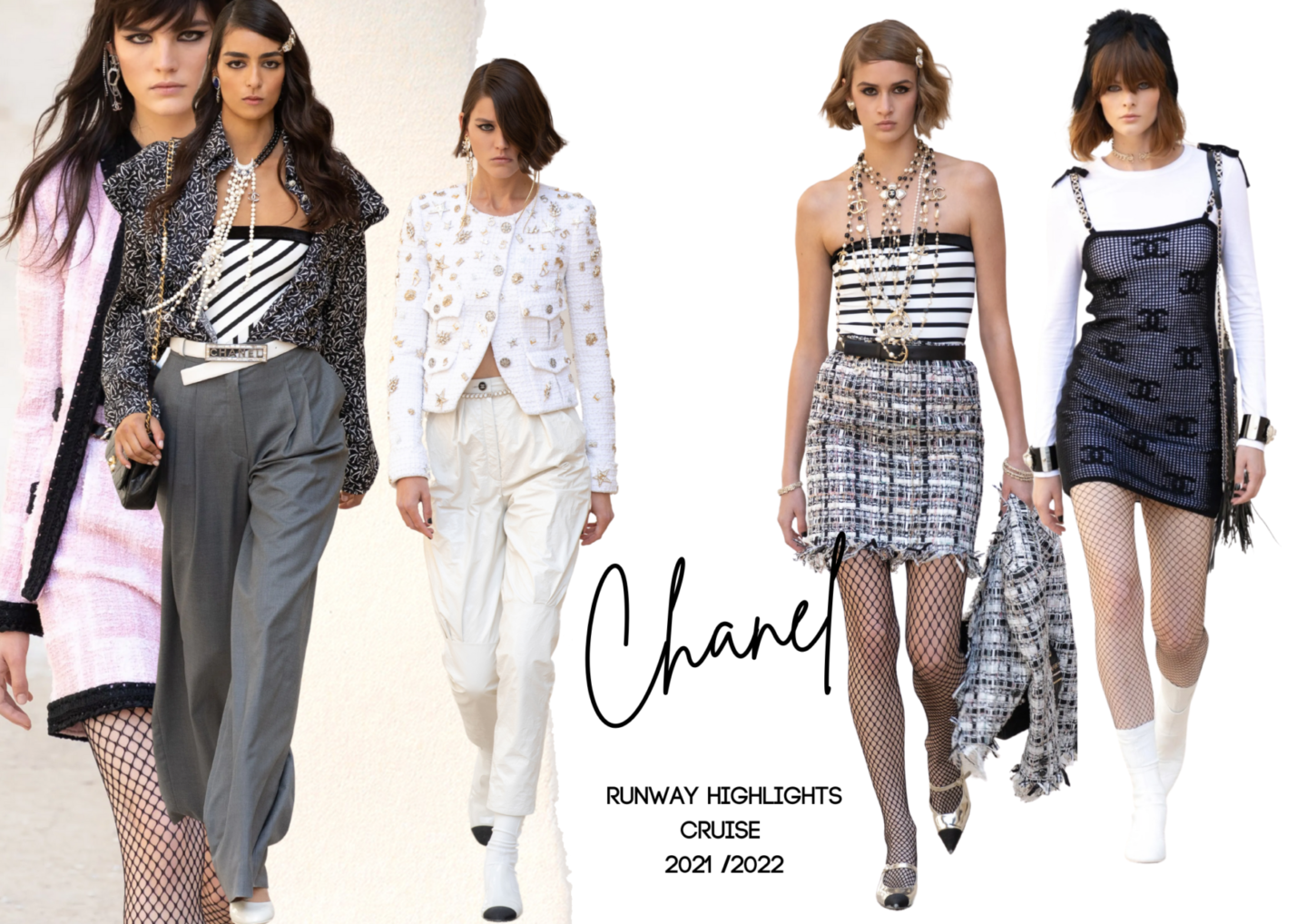 I was so thrilled to be invited to my second Chanel show, Cruise 21/22. If you haven’t already checked out the details of the look I styled for the show, you can check it out in my previous blog post – it’s one of my all-time favourite outfits (so far!).

The show itself was beautiful as always, featuring amazing graphics and an exciting edgy vibe. This season, Virginie Viard sought inspiration from Provence and, of course, the production was breathtaking, with the collection being shown at the ‘Carrières de Lumières’ (Quarries of Light), a dramatic-looking excavated quarry. This location was also a nod to Jean Cocteau and his film ‘The Testament of Orpheus‘ which inspired Viard’s most recent collection by way of the velvet and leather textiles, the contrast in tones, and the mesmerising light projections scattered throughout the space.

With such a statement backdrop, it’s clear that the approach this season was going to be both modern and strong while continuing the underlying theme of powerful femininity that Chanel is so well known for.

“Echoing the extreme modernity of Cocteau’s film, I wanted something quite rock. Lots of fringes, in leather, beads and sequins, t-shirts bearing the face of the model Lola Nicon like a rock star, worn with tweed suits trimmed with wide braids, and pointed silver Mary-Janes. A look that recalls as much the modernity of the sixties as that of punk…“

There was a strong emphasis on monochrome, yet it was remained intriguing as there were so many fabric experimentations varying from fringed and studded leather to sequined classic tweed, creating a wonderful juxtaposition.

The collection was also full of meaningful symbols such as the embroidered doves on the knitwear. I think it’s really interesting as Cocteau was good friends with Coco Chanel and these symbols are a reference to her apartment where they would often meet! It’s so clever how these have been woven into the pieces, not only featuring on the clothing but also printed onto the denim and used within the embroidery detail on the jackets.

One of my absolute favourite looks was the mesh dress emblazoned with the ‘CC’ logo. I loved it styled with a simple tee underneath and fishnet tights and could also imagine pairing it with some chunky biker boots for that cool-girl rock chick vibe.

If you’ve seen my Chanel look, you’ll know how much I love to layer Chanel Jewellery, so I particularly loved the look with multiple chain necklaces draped across the blazer in varying lengths and chain widths. The gunmetal effect is super cool too, it certainly adds an edge to the outfit.

Speaking of accessories, the layered chokers slightly remind me of a modern-day 1920’s style flapper and that old vintage glamour, what do you guys think? Plus, I can’t get enough of this hair slide. I love my Chanel script hairclip but I might need to add another to my collection… ;).

In terms of shoes, I love the metallic pumps. Not only do they add extra glamour to the looks but I find that metallics almost act as a neutral and are so easy to pair with any outfit. The ankle sock boots with the metallic toe caps are also very cool! I would wear them with some skinny grey jeans and an oversized blazer paired with statement earrings for an effortlylessly cool, yet put-together look.

Lastly, what moved me the most was the finale. It felt like a true symbol of peace and unity as the models released doves into the sky and after the tough times we have been all been going through, it felt like lovely a reminder to appreciate those special moments in life. <3